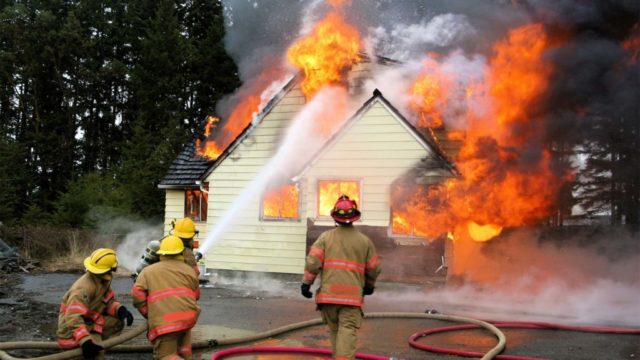 Home fires are, thankfully, trending downwards in the last ten years, but that doesn’t mean they still don’t happen. According to FEMA, there were over 1.3 million fires in 2018 (the last year for which they have data). Past that, the vast majority of fires are not just unintentional, but totally avoidable with a bit of common sense. At SERVPRO of The Southtowns and SERVPRO of West Seneca/Lancaster, we see firsthand the devastation that fires can cause every single day. More often than not, these fires are started by one of five common causes.

What are those causes? And how can you avoid them? Let’s review.

Candles make a house a home, right? Sure – but they can also be a serious fire risk if not properly attended.

According to the National Fire Protection Association, candles are one of the leading causes of home fires, especially during the holiday season. Three out of five of those fires is started when someone simply leaves something flammable too close to the candle.

The bulk of the remaining candle fires are equally avoidable. If you’re going to burn a candle, remember to blow it out when you leave the room or go to bed. Watch your hair and sleeves when you light the candle. Finally, don’t let it burn all the way down – put it out before it gets too close to the holder.

Smoking cigarettes is on the decline, but unfortunately, smoking materials are the leading cause of fire deaths, according to the NFPA.

Mostly, these fires occur because an individual is smoking indoors and does not put their fire out properly. Many of these individuals are older and may fall asleep while smoking. The situation becomes exponentially worse if they use medical oxygen or have oxygen tanks nearby.

If you do smoke, choose fire-safe cigarettes and make sure they’re stored away from children, along with any lighters or matches. Put your cigarette out in a proper ashtray.

Even e-cigarettes can be dangerous, with some batteries actually overheating and exploding while charging or in use. Do not let your e-cigarette battery charge unattended.

The phrase “electrical fire” often brings to mind the idea of faulty wiring, poor workmanship or bad maintenance. While it’s true that many electrical fires can be prevented by a qualified electrician, it’s also true that others start simply due to misuse.

You should ensure that all electrical work is performed by a trustworthy and competent electrician. If you have recurring issues with fuses blowing, breakers tripping, dimming lights, sparks from your outlets, or even tingling sensations that occur when you touch appliances, you should absolutely call an electrician as soon as you can.

On the other hand, you should also work to avoid any electrical risks that stem from user error. Often, the biggest risks come from appliances. You should only plug in one heat-producing appliance (e.g. a toaster) into an outlet at a time. For major appliances (like a refrigerator), do not use extension cords or power strips – plug them directly into the wall.

Extension cords in general should be avoided in your home – they’re for temporary, not permanent, use and can become a fire hazard. That goes double if you’re running them under carpets or doorways.

In Western New York, heating your home isn’t a convenience – it’s a necessity for getting through our grueling winters.

That fact doesn’t mean that you can be cavalier about how you produce heat in your house. Heating equipment is one of the leading causes of home fire deaths, according to the NFPA. The bulk of those deaths are preventable.

If you’re using a heating element (e.g. a wood stove, space heater, fireplace or even your furnace), keep anything flammable at least three feet away from the source of the heat. It’s a good idea to keep kids and pets that far away as well.

If you have a fireplace, make sure that you get your chimney inspected and swept on a regular basis. You would not believe how many fires in the Southtowns alone could be prevented by routine chimney maintenance.

Finally, make sure that you turn off any portable heaters before you go to bed. Everyone likes to wake up toasty, but it’s not worth the risk.

By far, cooking is the leading cause of fires in the US. According to FEMA, 52% of residential fires are caused by cooking accidents. Even in nonresidential buildings, cooking leads the pack, causing 30% of fires in those structures as well.

Thankfully, most cooking fires can be prevented, or at least mitigated, with a bit of caution and common sense. The bulk of kitchen fires start simply because someone walked away from what they were doing – don’t leave your food unattended, and you’re well on your way to safety.

Past that, many fires start because the individual is sleepy or has had a few too many glasses of wine. If it’s late, or you’re not all there, order in – there are tons of locally-owned restaurants that deliver.

Finally, if you have a grease fire, fight your instinct to try to extinguish it with water – that could lead to the fire splattering and becoming exponentially worse. Instead, use a pot lid or baking soda to smother the flames.

Overall, if there’s one important takeaway here, it’s this – don’t be a hero. If a fire gets out of hand, get out and call 911. The brave men and women of our local fire departments are trained to take on serious fires and save lives. They’ll be here to help you if you need them., and so will SERVPRO of The Southtowns and SERVPRO of West Seneca/Lancaster.

Posted in Echoes from the Chamber, Operations/Maintenance