HAMBURG, N.Y. — Lougazi continued to use his patented late charge to the wire and once again it paid off in a victory as he captured the $13,000 Open Trot at Buffalo Raceway on Wednesday night (Feb. 5).

First over and sitting third past the half mile marker, Lougazi made steady progress to the front and took command at the top of the stretch, beating a closing Daylon Phantom (Renaldo Morales III) by a length in 1:58.3 over the good track. Wilberforce (John Cummings Jr.) took third.

“Anytime we are within four lengths of the lead, I am feeling pretty good about our chances,” driver Ray Fisher Jr. said of Lougazi and his closing tactics. “We stick to the same game plan every week. There’s only one way to race him.”

Owned by Mary Warriner and trained by Ryan Swift, it was the first win in two tries this season for the 6-year-old gelded Lougazi (Lou’s Legacy-Winning Blade). The win jacked his career earnings to $206,543.

HP Sissy (Denny Bucceri) made Protect Blue Chip go the long mile in the co-featured $12,000 Class A-Open for the distaff pacers and those precious extra strides proved to the the difference.

Handing out the parking ticket for the entire mile, HP Sissy turned back the late challenge by a stubborn Protect Blue Chip (Billy Davis Jr.) to score the half length decision in 1:57.0.

Off the wings, HP Sissy and Protect Blue Chip were both intent in cutting the mile and neither gave an inch. With fractions of :28.0, :57.0 and 1:27.0, HP Sissy was able to nudge ahead at the top of the stretch but Protect Blue Chip stayed within striking distance and made a late bid again but came up a half length short. Lady London (Fisher Jr.) was third.

Owned by the Finocchario’s Dream Stable and trained by Mike Ohol, HP Sissy (Up The Credit-Monica Blue Chip) is a 7-year-old mare that has now produced $373,629 in lifetime earnings.

David McNeight III had a driving triple with Bucceri and Fisher Jr. collecting two each. Sabrina Shaw had a pair of training victories.

Racing will continue on Saturday evening at 6 p.m. with a 13-race program scheduled. There’s a $6,000 guarantee in the Pick 5 which begins in the second race. 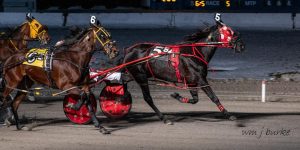