Hamburg, New York – Santa Claus will make his way to the Village of Hamburg’s historic Erie Railroad Depot at the corner of Scott and Union Streets by train on Saturday, December 1st. St. Nick will arrive at 9:30am aboard a train pulled by “Viscose Company” #6, a 1925 0-4-0 steam locomotive. Santa will then make his way inside the depot to Artcraft Toy Trains where he’ll meet with children until 5pm. Parents are encouraged to bring their cameras to take free pictures with Santa.

Once Santa arrives, short train rides on the Holiday Steam Express to Water Valley will depart the Hamburg Depot on Saturday, December 1st, Sunday, December 2nd, Saturday, December 8th and Sunday, December 9th at 10am, 12 Noon & 2p. The cost for the 40 minute rides (5.68 mile round trip) is $20 per person. Children will receive a small gift as part of their ticket. Tickets may be purchased online at BCJRailroad.com or at Artcraft Toy Trains.

This special holiday train arrival is being coordinated by Artcraft Toy Trains in partnership with the Buffalo, Cattaraugus & Jamestown Scenic Railway and the Buffalo Southern Railroad. Now in its 18th year, Artcraft features a large operating toy train layout and specializes in toy trains of all gauges especially Lionel and American Flyer trains. Artcraft is also an Authorized Lionel Service Station and is Buffalo’s only business that services vintage toy trains on premises.

Viscose Company #6 was originally constructed by the Baldwin Locomotive Works for the American Viscose Company of Roanoke, Virginia. In the early 1960’s the engine was sold to the Gem City Iron & Metal Company of Pulaski, Virginia. In September, 2004, #6 was purchased by Scott Symans of Dunkirk, New York who restored the locomotive to operating condition. Passengers will travel in vintage railroad equipment that includes two 1930s era passenger cars that once shuttled commuters in New York City.

The trips are being conducted by the Buffalo, Cattaraugus & Jamestown Scenic Railway Company, Inc. The BC&J was founded in 2011 is chartered as a New York State 501c3 not-for-profit corporation. The BC&J’s mission is focused on developing and operating educational steam and diesel-electric passenger train excursions in the Buffalo-Jamestown corridor as a way of promoting Western New York’s industrial, transportation and agrarian heritage. The railroad right-of-way is owned by Erie County and leased to the Erie County Industrial Development Agency who manages the property. Buffalo Southern Railroad, a locally owned Class III Common Carrier shortline railroad, operates the line. 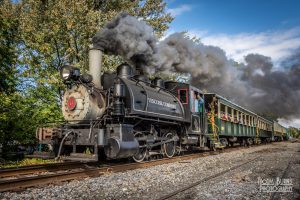